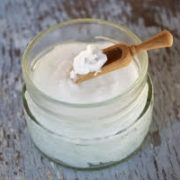 The recent headlines about coconut oil say that because it’s higher in saturated fat than beef or lard, it’s bad for you. “You’ll drastically increase the chances of cardiovascular disease if you eat it because saturated fat raises cholesterol, which leads to heart disease and mortality.” That kind of warning comes from the American Heart Association (AHA)—a powerful organization that continues to promote the mythical direct link between saturated fat and heart disease.

We know from the research that saturated fat can in fact raise your cholesterol. However, it raises it in a good way. Evidence has shown if your LDL cholesterol contains a lot of small, dense particles and you also have high triglycerides, then you’re setting the stage for heart disease. Those small, dense particles come from a diet that’s high in carbs and low in fat. Reduce your carbohydrate consumption and increase the good quality fats, your cholesterol particle ratio of bad to good will almost certainly improve.
However, if your LDL cholesterol is mostly made up of large, fluffy particles and your triglycerides are low, your risk of heart disease is much lower.

What makes the difference between dangerous small, dense LDL particles and safer LDL isn’t the amount of saturated fat you eat. In fact, study after study shows that your fat and cholesterol intake have almost no impact on your blood cholesterol. It’s the amount of sugar. The AHA estimates that the average person eats 20 teaspoons of sugar a day. Sugar raises your LDL cholesterol, lowers your HDL cholesterol, and increases your triglycerides. It has been shown to increase insulin resistance and trigger inflammation. In fact, an important study in JAMA Internal Medicine in 2014 proved conclusively that high sugar consumption is closely linked to death from heart disease—and that link is far closer than it is for cholesterol, smoking, hypertension, or any other risk factors. That is the statistic– about the dangers to your heart and your health–is where the real headline scare should be.

There’s no need to avoid saturated fat as long as it comes from a healthy, plant-based source. Coconut oil is definitely preferable to cheap, highly processed vegetable oils that have had their nutrients stripped away. Coconut oil has other health benefits as well. The main fatty acid in coconut oil is lauric acid, which has well-known antibiotic, anti-microbial, and anti-viral benefits.

So go ahead. Use coconut oil in your cooking.

Why a Low-Sodium Diet Might Wreck Your Health By Dr. Mercola
Scroll to top